To many people, China appears to be this huge unreadable monolith of a state run nation. Yet this is often a case of a skewed perspective. China's policies and development strategies can appear extreme, yet on the other hand, has responded remarkably well to change in the past, and has allowed the country to grow into the enormously complex, and surprisingly inclusive system of economics it is today. Nevertheless, it has reached a stage of political stagnation as a result of a newfound intricacy and unwillingness to restructure.

AmCham is pleased to host a session with William H. Overholt, author of the recently published China's Crisis of Success, and an expert with an extensive background in consulting, strategic planning. Mr Overholt's career spans across 16 years of policy research at a think tank, ten years at Harvard University, and 21 years running investment bank research teams. He too, has written several books on the geopolitics of America and its relationship with the wider Asia Pacific, making him uniquely qualified as a strategic planning advisor in the region.

"China is like an entrepreneur whose business has been wildly successful but gets to the point where continued success requires organizational transformation. That is a crisis of success", he writes. "Like other Asian miracle economies, in its first successful decades China managed both economy and politics through extremely centralized decisions, made possible by a relatively simple economy and by shared fears that simplified politics." This session aims to elaborate on China's past successes, and its increasing unsuccesses, as well as peel back the veil of misconceptions surrounded this modern power bloc.

Register for the event now to learn more.

First 15-20 minutes is for networking 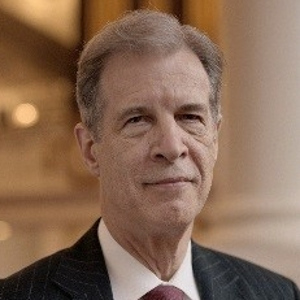 Dr. William H. Overholt has been a Senior Research Fellow in Harvard’s Asia Center and its Kennedy School of Government since 2008. During 2013-15 he also served as Senior Fellow and then President of the Fung Global Institute in Hong Kong. His career includes 16 years doing policy research at think tanks, ten years at Harvard University, and 21 years running investment bank research teams.

Previously he held the Asia Policy Distinguished Research Chair at RAND’s California headquarters and was Director of the Center for Asia Pacific Policy; concurrently he was Visiting Professor at Shanghai Jiaodong University and, earlier, Distinguished Visiting Professor at Korea’s Yonsei University. During 21 years in investment banking, he served as Head of Strategy and Economics at Nomura’s regional headquarters in Hong Kong from 1998 to 200, and as Managing Director and Head of Research at Bank Boston's regional headquarters in Singapore. During 18 years at Bankers Trust, he ran a country risk team in New York from 1980 to 1984, then was regional strategist and Asia research head based in Hong Kong from 1985 to 1998.

At Hudson Institute from 1971 to 1979, Dr. Overholt directed planning studies for the U.S. Department of Defense, Department of State, National Security Council, National Aeronautics and Space Administration, and Council on International Economic Policy. As Director of Hudson Research Services, he also did strategic planning for corporations.

Dr. Overholt is the author of eight books, including China’s Crisis of Success (Cambridge University Press, 2018); Renminbi Rising: The Emergence of a New Global Monetary System (Wiley, 2016) and Asia, America and the Transformation of Geopolitics (Cambridge University Press, 2007). The others are: The Rise of China (W.W. Norton, 1993), which won the Mainichi News/Asian Affairs Research Center Special Book Prize; Political Risk (Euromoney, 1982); and (with William Ascher) Strategic Planning and Forecasting (John Wiley, 1983). He is principal co-author of: Asia's Nuclear Future (Westview Press, 1976) and The Future of Brazil (Westview Press, 1978). With Zbigniew Brzezinski, he founded the periodical Global Assessment in 1976 and edited it until 1988.

Dr. Overholt serves on numerous boards and advisory boards. He has been a consultant on strategic planning and foreign affairs to the Conference Board, the U.S. Army Strategic Studies Institute, the Foreign Service Institute, Dean Witter Reynolds, A.G. Becker, and numerous corporations. He has served as political advisor to several of Asia's major political figures and has done consulting projects for the Korea Development Institute, Korea's National Defense College, the Philippine Ministry of Agrarian Reform, and Thailand's Ministry of Universities.