The View from Washington: COVID-19 and The Future of US-China Relations

The COVID-19 pandemic has put more strain in US-China relations as both countries engage in a multi-faceted trade war. As US-China strategic competition intensifies during COVID-19, is there a window of opportunity for the two giants to cooperate to combat the pandemic and other global crises? How can international businesses manage risks in the areas of supply chain, regulation, and splinternet of things? How will political tensions affect economic relations especially during US presidential election season?

Please join this US-China Tension Series webinar with Evan Medeiros, who served as senior director for Asia at National Security Council in the Obama Administration, to unpack the impact of COVID-19 on the world's most important bilateral relationship. 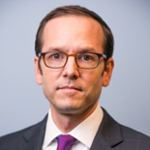 Dr. Evan S. Medeiros is the Penner Family Chair in Asia Studies in the School of Foreign Service and the Cling Family Distinguished Fellow in U.S.-China Studies. His research and teaching focuses on the international politics of East Asia, U.S.-China relations and China’s foreign and national security policies. He has published several books and articles and regularly provides advice to global corporations and commentary to the international media.

Dr. Medeiros’ expertise is a unique blend of research expertise and practical experience. He previously served for six years on the staff of the National Security Council as Director for China, Taiwan and Mongolia - and then as Special Assistant to the President and Senior Director for Asia. In the latter role, Dr. Medeiros served as President Obama's top advisor on the Asia-Pacific and was responsible for coordinating U.S. policy toward the Asia-Pacific across the areas of diplomacy, defense policy, economic policy, and intelligence. He was actively involved in all aspects U.S.-China relations for six years, including several U.S.-China summits.

In recent years, Dr. Medeiros advised multinational companies on Asia in his role as Managing Director for Asia-Pacific at Eurasia Group, the global political risk consultancy. Prior to joining the White House, Dr. Medeiros also worked for seven years as a senior political scientist at the RAND Corporation. From 2007-2008, he also served as policy advisor to Secretary Hank Paulson working on the U.S.-China Strategic Economic Dialogue at the Treasury Department.

Robert T. Grieves is Founder and Chairman of Hamilton Advisors Limited, a strategic communications firm established in Hong Kong in 2009. Following a career in journalism for The Times (London) and The Economist, both in Beijing, and Time magazine and Forbes, in New York, Robert served in top-tier regional and global communications roles. His communications career includes senior positions at Burson-Marsteller, Head of Marketing and Communications for Merrill Lynch Asia Pacific, Global Head of Communications for The Bank of New York and President, Hong Kong, for Edelman.

Robert is Chairman of the American Chamber of Commerce in Hong Kong and a former Chairman (2015-2017) of the Council of Public Relations Firms of Hong Kong. He has lectured at Tsinghua University in Beijing, at the Hong Kong University of Science and Technology, at the Wilson Center in Washington, D.C., and in Nanjing as a speaker at the Hong Kong Trade Development Council conference on Chinese brands.